They are photovoltaic systems that do not store energy in batteries; the energy is injected into the electrical distribution system of the factory, house, etc.

During the day the energy that the system produces is consumed and if more energy is needed, it is taken directly from the utility grid, just like at night.

You get back the money invested in these systems quickly and then you can start saving significant amounts on your electricity bills. 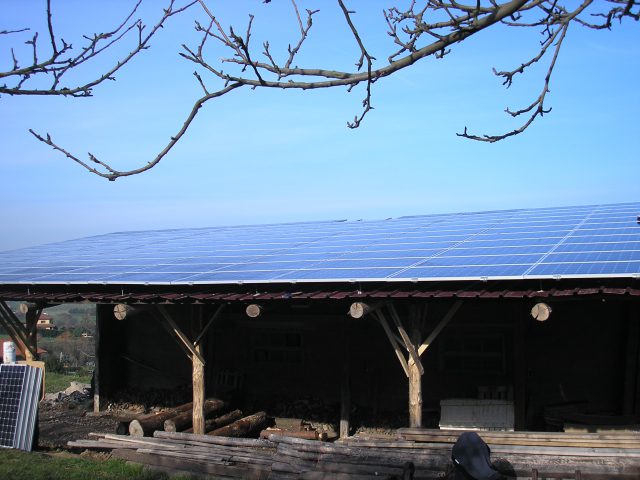 The photovoltaic self-consumption systems, without batteries, are mainly recommended for FACTORIES where the daytime production process consumes the electrical energy produced by the solar radiation.

The proper use and planning of the production process carried out in the peak hours of sunlight means that the independent system only uses the power from the electricity distribution company at specific times. These systems are becoming increasingly more profitable due to the constant increase in the price of electricity.

Warehouse roofs:
Systems are set up on warehouse roofs and they produce electricity close to the consumption points (industrial estates and towns).

This energy can be consumed by the factory located in the same warehouse where the system has been set up or it can be injected into the grid and consumed by other users.

We use our own and third-party cookies to obtain statistical data on the navigation of our users and improve our services.

You can get more information here.

This website uses cookies so that we can provide you with the best user experience possible. Cookie information is stored in your browser and performs functions such as recognising you when you return to our website and helping our team to understand which sections of the website you find most interesting and useful.

Strictly Necessary Cookie should be enabled at all times so that we can save your preferences for cookie settings.

If you disable this cookie, we will not be able to save your preferences. This means that every time you visit this website you will need to enable or disable cookies again.

This website uses Google Analytics to collect anonymous information such as the number of visitors to the site, and the most popular pages.

Please enable Strictly Necessary Cookies first so that we can save your preferences!

Please enable Strictly Necessary Cookies first so that we can save your preferences!